County Councillor for Whitehouse and Whitton

Sam was born in London but raised in Suffolk. She attended Holbrook High School and then went onto Colchester Sixth Form College. Sam is a mother of two children. She owns a small personalised gift business and works part time for Suffolk Coastal Conservatives. Gifted with flexibility in her work, she has the freedom to volunteer and do community work, which is a huge passion of hers.

Throughout her adult life, she has volunteered or has worked in roles which make a positive difference. Some of the examples are, her time in the Territorial Army, when she worked for a charity in the A&E department of Ipswich hospital and her most recent project as Chair of the Gainsborough Community People’s Forum, which is similar to that of the Big Local Trust project in North Ipswich. As a family, Sam and her children are often seen litter picking the area they live and organising litter picks for the greater community.

Sam has chosen to stand in this division in this County Council election because having achieved an awful lot as a community activist, she now feels it is time to see how much more she can achieve as an elected representative. 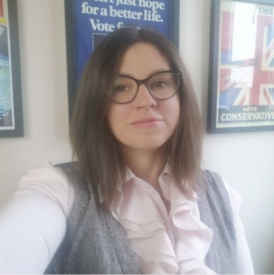